Musgrave Minerals is dedicated to discovering new deposits of economic mineralisation and growing its gold resource base using systematic, well-resourced exploration methods and programs. Musgrave Minerals is focused on its key Cue Project in the Murchison Province of Western Australia with additional projects in the Musgrave region of South Australia (Figure 1). 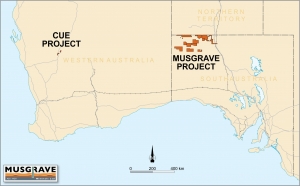 Musgrave commenced exploration on the Cue Project in February 2016 and subsequently acquired 100% of the key tenure within the Project in August 2017.

The Cue Project consists of the Moyagee Gold southern area and Hollandaire Copper norther area in the highly prospective Murchison Province of Western Australia. The project has significant upside gold potential with recent gold discoveries and new high-priority targets. Musgrave’s intent is to grow the existing resources and discover new economic mineralisation that could underpin a profitable gold development. An initial high-grade resource was estimated for the Break of Day deposit in 2017 following the discovery.  Break of Day is still open at depth with significant potential to grow the resource highlighted by recent (Dec 2019) hits such as 45m @ 11.8g/t Au (19MORC037) in what could potentially be a new structural position.  There is also significant upside at the Lena deposit where drilling is continuing with the aim to grow the resource. New gold discoveries such as Lake Austin North show geological signs of being large, well mineralised gold systems capable of delivering significant resource upgrades.

In March 2019 Musgrave entered into an Option Agreement to acquire 100% of the non-alluvial gold rights to the Mainland Project directly adjacent to our 100% owned tenure at Cue. Mainland has seen very limited basement drilling but has produced significant quantities of alluvial gold.

An option agreement has been executed with Cyprium Australia Pty Ltd were Cyprium can earn an 80% interest in the non-gold rights over the northern tenements at the Cue Project. Musgrave will retain the gold rights to the tenure and a 20% free carried interest to Bankable Feasibility Study on the non-gold rights.

The Cue Project hosts a combined estimated Indicated and Inferred Mineral Resource of:

Break of Day is a new high-grade gold discovery with potential to grow through further drilling. The mineralisation is currently open down plunge and a new potential ‘link-lode’ has been identified in drill hole 19MORC037 which intersected 45m @ 11.8g/t Au at 144m down hole.  This is outside the current resource interpretation and has the potential to add significant upside to the deposit. Further drilling is being planned.

Break of Day Mineral Resource by JORC Classification and reported above a cut-off grade of 3.0 g/t Au

* Due to the effects of rounding, the total may not represent the sum of all components

Significant drilling results from Break of Day include:

In July 2017 Musgrave announced a significant update to the near-surface Lena Resource and is continuing to drill at Lena with a new resource update expected in Q1 2020.

Lena Mineral Resource by JORC Classification and reported above a cut-off grade of 1.0 g/t Au

* Due to the effects of rounding, the total may not represent the sum of all components

The information in this report that relates to Mineral Resources at Break of Day and Lena is based on information compiled by Mr Aaron Meakin. Mr Meakin is a full-time employee of CSA Global Pty Ltd and is a Member of the Australasian Institute of Mining and Metallurgy. Mr Meakin has sufficient experience relevant to the style of mineralisation and type of deposit under consideration and to the activity which he is undertaking to qualify as Competent Persons as defined in the 2012 edition of the Australasian Code for the Reporting of Exploration Results, Mineral Resources and Ore Reserves (JORC Code). Mr Meakin consents to the disclosure of the information in this report in the form and context in which it appears.

In September 2019 Musgrave announced that it had entered into an Earn-In and Joint Venture Exploration Agreement with Evolution Mining Limited over a select area of Lake Austin and surrounds (JV Area) of the Cue Project in the Murchison District of Western Australia.  The JV Area excludes all the known resources including Lena and Break of Day and the Mainland option area. Evolution can earn a 75% interest in the JV Area by sole funding A$18 million on exploration over a five year term with a minimum commitment of A$4 million in the first two years. Musgrave will manage the JV during the initial period. As part of the Agreement, Evolution has agreed to subscribe for 18,587,361 ordinary shares in Musgrave through a share placement (“Placement”) at a price of $0.0807 per share. The placement was set at the 30-day VWAP for Musgrave shares and represents a holding of 4.59% (undiluted) in the Company.

The basement mineralisation has now been defined over a strike length of 500m and is open to the north, south and down dip.

Aircore drilling has extended the A-Zone gold “halo” over a strike of more than 3km where it remains open to the north. This regional scout geochemical drilling has also defined multiple zones of regolith gold anomalism that now have a combined strike extent of >8km.  This suggests the likelihood of multiple basement sources for the dispersed regolith gold. Further drilling is required.

An economic gold deposit may have a regolith footprint of only a few hundred metres.

The Musgrave Province is one of the last under-explored frontiers in Australia in terms of mineral exploration, and is prospective for a number of commodities. The centre piece is the recognition of, and access to, the under-explored potential of the Giles Complex, a 1080Ma aged mafic-ultramafic layered intrusive complex that hosts the massive Nebo-Babel deposit, a major nickel and copper sulphide deposit in the Western Australian portion of the province.